This site is in English and Danish Language

Spring 2012 I was for the first time in the danish artist Asger Jorn's Atelier on the danish iceland Laeso. The hause is called "Bangsbohave". It's a legacy you can get as an artist. It's an old farmhouse in 70's style painted pink with blue woodwork as seen from my photo, self-portrait th. It is iddylic far out in the countryside on Laeso with the nearest neighbor as a bowling alley and a little brook.

You can feel the mood of Jorn in this place where you stand alone with the herb and nature. Just standing in his old studio and snoring the past of the present is an experience. It was as if the Jorn himself was still there - figuratively speaking. It was hugely inspiring and educational. In these surroundings one can not avoid being inspired and energetic to try to walk in one of the Danish masters footprints - the Asger Jorn footsteps. In these environments, all pictures, both photo, watercolor and acrylic images in this series are created.

Asger Jorn had more than 60 different figures called aggenakker bags he used in his pictures. These were figures that go back in his pictures. That's why you can see everything in them. In fact, they are purposely very figurative. Therefore, some of my works are not abstract - they are now never completely - but inspired by my own aggenakker, which I call pulliks - because they are inspired by children's drawings. Children's immediate talent before it dies as an adult. Later I've integrated both the child Lotte and the adult Lotte into all my pictures, which has created a more expressive style since Jorn and these expressive pulliks are thus contrasting the safe adult line. 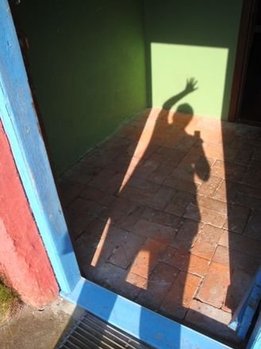 Where you went 6. Self-portrait in the entrance of Bangsbohave. Asger Jorns Ateliér på Læsø.

It is not allowed to steal photos from this page without permission. Theft is punishable!