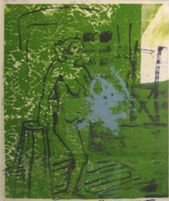 I started making lithographs in 2004, where I went to the BKF Course in Litography with Jan Andersson from the Faroe Islands Graphic Workshop at the National Graphics Workshop at Old Dok. The course ended with an exhibition of our works, among which Bjørn Nørgaard's lithographs were also included. Later, I have been associated with a private graphic workshop "The Little Academy" just under the 18 Novbr. where I work today. My lithographs have come a long way and have participated in 6th Lessedra World Art Print Annual 2007 in Bulgaria. Mini Print International 2007 in Spain, France and England. Næstved Exhibition of Mini Square Prints 2007. The 7th Kochi International Triennial Exhibition of Prints in Japan 2008. The Americas Biennial Exhibition of Contemporary Prints 2008 in the United States. 2nd International Mail ArtExhibition in Nyíracsád, Hungary 2011 and there will certainly be more international censored exhibitions after here.

The lithographic series contains lithographs from the small lithographs of approx. 10x10 cm and artmoney to the big ones but there are limits how big a lithograph can be. Lithography is stentry. You draw directly on a heavy fatstone with lithographic drawing material, after which you process the stone until the work of art has been etched into the stone, so that an impression can be formed. The more colors, the more stones you have to prepare, as you can only print 1 color at a time, unless you make iron dye, rolling more colors on the roll at the same time. Making lithography is actually a rather complicated process that takes a lot of time when you as an artist have to do it all by yourself. This print technique is recognized as art, and each lithograph must be signed in a very special way. Although a lithograph can be printed many times, it's a work of art, since every pressure will have its personality and not quite look like the others. Even I print only a few copies of each, which makes the lithographs more valuable. Sometimes I process my lithographs with acrylic and watercolor so they become unica. Lithographs can be ordered here on the website so they can be send by snailmail. Enjoy!

©Copyright 2000-2019. All Rights Reserved. Lotte Kjoeller - E-mail Lk@Lk-kunst.dk. It is not allowed to steal photos from this page without permission. Theft is punishable!